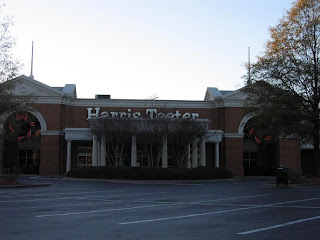 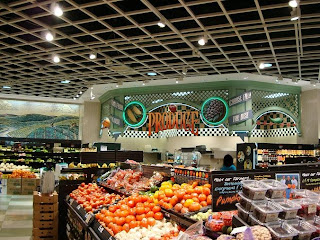 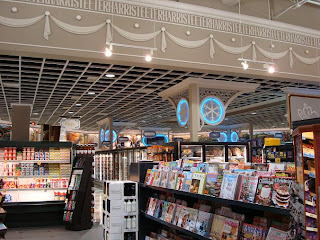 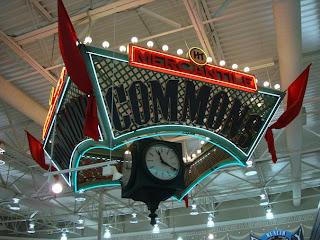 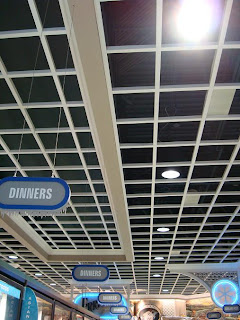 Harris Teeter's Morrocroft Village Flagship Store in Charlotte's SouthPark is the largest store in the entire chain, according to the Mecklenburg County Tax Website it encompasses over 72,000 square feet -- rivaling the size of the HT store at Greensboro's Shops at Friendly Center. The Morrocroft store opened in 1992, replacing the old Harris Teeter at SouthPark Mall, and was created to be a new generation of Harris Teeter flagship stores. Indeed - at the time, especially - Charlotte hadn't seen a grocery store like this and it gained notiriety and the nickname as the original "Taj-Ma-Teeter." Today it is still thriving as one of the busiest stores in Charlotte and one of the busiest HT's in the entire chain.

Also, although Harris Teeter didn't last in Atlanta (to the dismay of many), their initial success was credited to Harris Teeter's Morocroft design. See related article: HT Success in Atlanta began at Morrocroft.

Update: Our friend Pat (of Charlotte Eats and Charlotte Ads) has graciously provided this photo of the Morrocroft store from 1992, noting that a renovation in the late 90s changed this section: 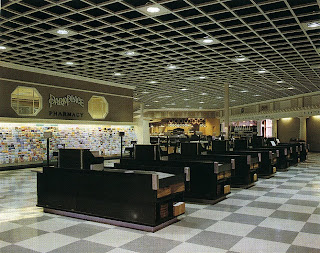 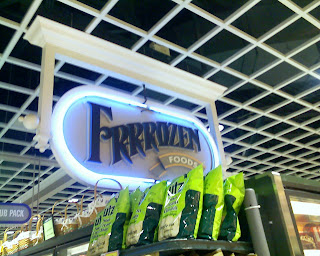 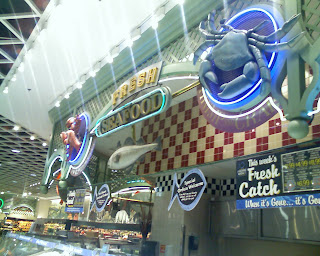 I was thinking about this Harris Teeter recently. I believe this store has undergone two major renovations.

The first happened at the end of the 1990's--the wall that housed the greeting cards (and served as a side of the pharmacy) was removed which opened up the entire area by the registers (the pharmacy was moved to its present location next to the floral dept). At this time, HT also began stripping away some of the unique aspects of this location--the in-house made doughnuts, the gourmet ready-to-eat gourmet meal section (they even housed a culinary chef for this operation)--a lot of the fresh prepared foods were replaced with prepackaged items (or Krispy Kreme in the case of the doughnuts).

With the threat of EarthFare opening across the street, HT did an about-face a few years ago and began frantically adding back most of the original custom-made and gourmet foods (they even started making the doughnuts in-house again!) that they had stripped away previously.

At about the same time (or right after), they also renovated the Cotswold location and announced that this was the second flagship location of the chain.