In 2011, we reported that Trader Joe's was interested in Greensboro.  The fact is, they were/are only interested in one site, a currently residential site adjacent to Friendly Shopping Center, which is currently home to both a Whole Foods Market and Harris Teeter.  Today, the low price natural/organic/quirky retailer stated they are "no longer interested" in other sites in Greensboro.  To the dismay of many, this continues the roller coaster that Trader Joe's has put Greensboro through.

Trader Joe's has opened stores in Wilmington, Asheville and nearby Winston-Salem in recent years, so there's no reason that they couldn't open a Greensboro location.  We think this is just a bump in the road to Trader Joe's, and eventually they will come.   More from the Triad Business Journal.  In the meantime, Greensboro residents, keep driving to Winston-Salem and Chapel Hill for your Trader Joe's fix.

Grocerying speculated on its twitter page last year that Whole Foods would open a location in South Charlotte at Ardrey Kell Road and Providence Road.  Fast forward half a year, and the organic an natural foods supermarket has announced it will open a 40,000 square foot store off of Providence Road in a new development called Waverly, just south of Interstate 485.

This will be the third Whole Foods Market in the Charlotte area, after the SouthPark location adjacent to Phillips Place, and a new location going into a soon to be former Food Lion in Huntersville, next to Birkdale Village. 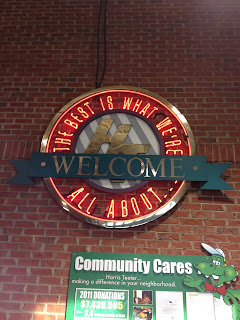 Recently, there has been a wild amount of frenzy regarding a potential sale of Matthews-based grocer Harris Teeter.  Speculation is ablaze about what might happen to the regional upscale grocer, which has stores in the Mid Atlantic region and the Southeast.  When The Wall Street Journal reported that Harris Teeter was exploring options for a sale and the chain consulted with J.P. Morgan financial advisors, other chain grocery store names such as Kroger and Publix were mentioned.  However, it is our thinking that the most likely scenario is that a private equity firm will buy the chain and keep its name and branding as-is, and retain the headquarters just outside of Charlotte.

If a sale occurred to Kroger, which is the second-largest grocery chain after Walmart, then we would see a return of the mid-market grocer to the Charlotte market, as well as a return to other markets that have experienced Kroger’s absence, like the Washington, D.C.-metro area.  Kroger, however, is the most typical mid-market grocer in America, which a price point that is more on par with Bi-Lo than Harris Teeter.  Kroger only has a handful of stores in North Carolina currently, in Raleigh and Durham, and if a takeover of Harris Teeter were to occur, this would make Kroger one of the most dominant grocery store chains in the state.

With Publix expanding into the Charlotte metro area, one would think that the quickest takeover for Harris Teeter, its most formidable competitor, would give them a stronghold of the market.  We don’t see this happening either though, because Publix grows a little more organically rather than through acquisition.  Publix is planning on opening stores in Charlotte’s Ballantyne and South End communities soon.

Ultimately, much of the speculation is just that, and like we said our prediction is that the customer won’t notice any changes if and when a transaction occurs.  With the store-swap with Lowes Foods last year in the Charlotte area, we think that Harris Teeter has worked hard to keep its core footprint of suburban markets and up and coming urban areas.
Posted by Grocerying at 2/16/2013 10:45:00 AM 4 comments:

Whole Foods Market announced their latest round of store openings this week.  Of all the stores announced, the North Carolina location is the only store that doesn't have a city listed yet.  According to the grocer, the city won't be announced just yet leaving the speculation to be open-ended.  Currently, Whole Foods Market has store locations in the following cities in NC: One location in Asheville, Cary, Chapel Hill, Charlotte, Durham, Greensboro, Wilmington and Winston-Salem, and two locations in Raleigh.  Whole Foods is continuing their expansion into mid-sized cities, as a Columbia, SC location is opened recently.

With that said, what are your thoughts? Do you believe that Whole Foods' next NC location will be in a suburban location of Charlotte such as Ballantyne or Lake Norman, or will another mid-sized city like Fayetteville or Greenville be landing a Whole Foods? Leave a comment below!
Posted by Grocerying at 11/09/2012 08:45:00 AM 15 comments:

A competitive grocery market calls for grocers to be on their toes at all times.  In keeping with the trend, Winston-Salem based Lowes Foods stores is rolling out a contemporary look at some of their locations. This store in Greensboro on New Garden Road is one of the first Lowes Foods stores with the new, modernized look.  Gone are the tall, bulky shelving units on the aisles, replaced with low-rise shelves and wider aisles.  Additionally, new sleek signage is displayed all around the store and throughout the center of the store, directing customers to where they can find newly-relocated items.  At this time, it is unclear how many of their stores will get this look, but our guess is that most of them will. 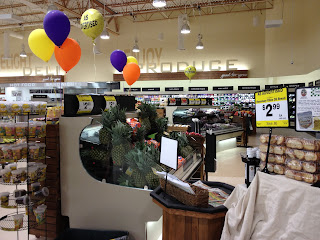 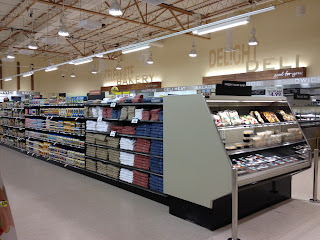 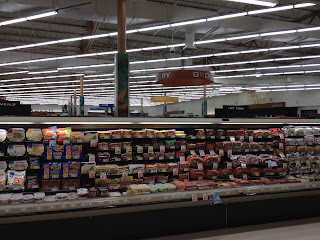 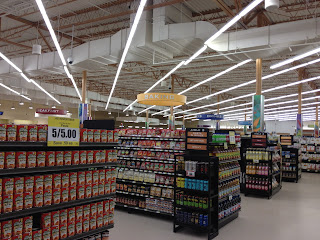 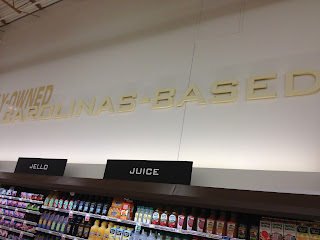 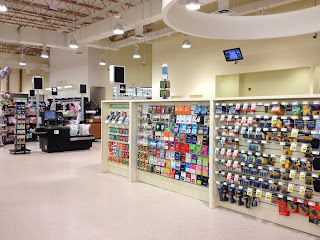 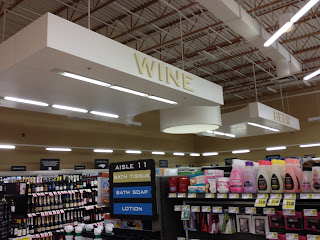 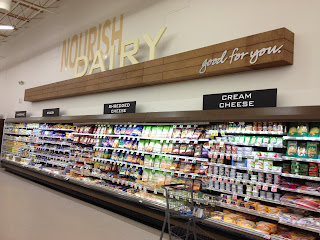 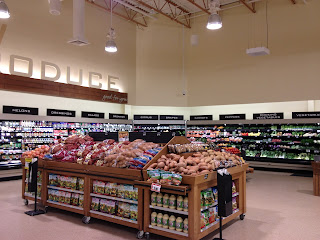 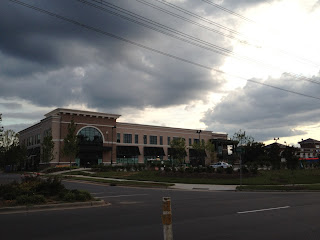 The highly anticipated opening of Charlotte's first Whole Foods Market store is August 29th, just in time for the Democratic National Convention.  The store is located off of Fairview Road, near SouthPark Mall and next to Phillips Place shopping center.  It will feature an underground parking garage and a cart escalator.

Local competition includes the flagship Harris Teeter store, the Earth Fare store at Morrison, and The Fresh Market at Strawberry Hill.  Other recent Whole Foods Markets that have opened in North Carolina include a Greensboro store in April and a Wilmington store in June.
Posted by Grocerying at 7/31/2012 03:39:00 PM 1 comment:

Breaking News: Harris Teeter and Lowes Foods are swapping stores in the Charlotte region and in Asheville.  We are working on the story, here are the stores that effected: 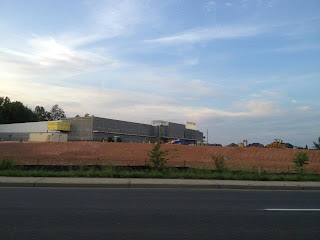 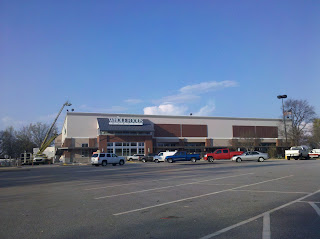 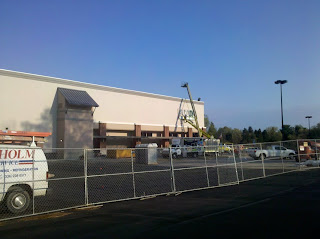 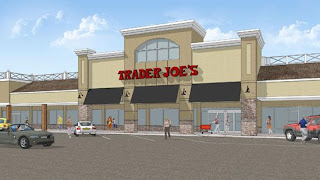 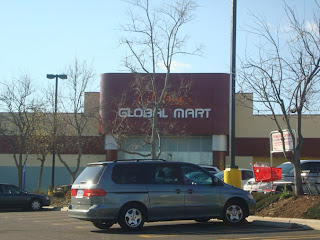 Above: Li Ming's in Durham in the former Circuit City

Li Ming's Global Mart, which already has two locations in the Triangle (one in Durham [photos] and a sister store in Raleigh, respectively), will soon breathe some life into the High Point Road corridor in Greensboro. Scheduled to open in the Fall of 2012, the Asian grocery store will encompass nearly 52,000 square feet in the Greensboro South Shopping Center, next to T.J. Maxx. High Point Road, an ever-evolving corridor has seen a shift to ethnic-oriented businesses in recent years. 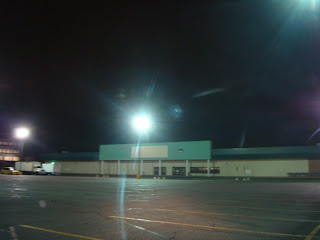 Above: the former Lowes Foods on High Point Road

The location that Li Ming's is moving into has gone through many incarnations. The store originally opened in 1969 as a branch of discount store Zayre, later was an Ames (another discount store) briefly. As a grocery store it has been a Buy For Less and a Lowes Foods. It has been empty for a number of years since Lowes Foods vacated, so this is certainly a welcome announcement for that shopping center. The Li Ming's in Durham opened last year in a former Circuit City space across from South Square Shopping Center.
Posted by Grocerying at 3/12/2012 03:43:00 PM 1 comment: