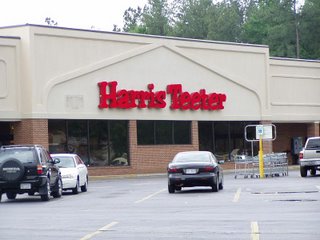 This Harris Teeter is located in Cherryville's White Pines Plaza shopping center. It has the look of the typical late 80s/early 90s prototype with a recent renovation somewhere in there. However, Harris Teeter's vacating of small towns and lower-income areas may put this, and other Harris Teeter stores in towns its size in danger. Kings Mountain, a town about 10 miles south of Cherryville, lost its Harris Teeter of many years recently (which has since become a Food Lion) citing competition from places like the Super Wal-mart in west Gastonia. That said, Harris Teeter has been in Cherryville at least since the 60s. This picture via Cherryville.com shows the old store near downtown Cherryville in 1968.
(Loopnet, White Plains Plaza Brochure, Cherryville.com)
Posted by Grocerying at 4/25/2006 02:29:00 PM

Hi there Mr "grocerying" sam Blog review editor from www.sgfriends.net An American Blog category has been setup you might want to list or submit your blog under this Category. We select only the "best idea" blog according to our standards.To activate the your blog list just register and use the submit option also your blog will be entering into a pool of The Most Popular Blog segment in our Site.Interested Bloggers may apply follow the instruction above Thank you all.

Looks like a cute little store. No way they'll let it last.

There are a few others like that one, but not a lot. Mostly the dying breed ones in smaller towns...