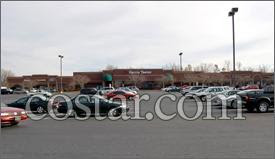 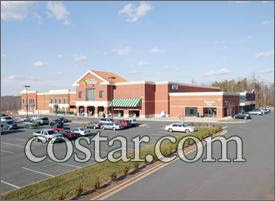 It was quite a challange to find a pic of this Harris Teeter store, but CoStar.com (which has virtually a photo of every retail establishment in the country) had a photo. It is located in Mint Hill Festival, about 15 miles from center city Charlotte. The store, a typical late-80s/early-90s HT model, closed on April 3, 2007 as if no one had noticed. MediaMongrel at UrbanPlanet had reported that this store was the comapny's most underperforming store in the chain. Many say that it was the Lowes Foods, built across the street in the mixed-use Mint Hill Town Center, that was the final death blow to the Harris Teeter store.
Posted by Grocerying at 4/09/2007 09:43:00 AM

Good job in finding that picture! That is a sad state for the Harris Teeter. Do you think a renovation may have alerted more people to its existence? I find it surprising it was a late 80s/early 90s model that still existed. But then, it's not in Charlotte, where any 10-year-old model is considered outdated. Boo to Lowes Food for closing this Harris Teeter.

Ok so I looked up the tax site, they said the shopping center was built in 1985 so I assume the HT opened with the center, which would make sense. I think a remodel may have helped, but it had been underperforming for a while. Also down the street is a Bloom, 2 Food Lions in either direction and a Bi-Lo store and Mint Hill just isn't as dense as say Ballantyne and Matthews, Yet!!

There are a lot of grocery stores in small Mint Hill so HT was kinda shutout. Matthews Festival and Steven Mill serves the middle/upper class of Mint Hill. The replacement store for Store #1 is at Idlewild&Margete Wallace roads #174. Its not doing that much either....same problem....no middle/upper class base to support it.

I saw this post from 2007. It's ironic that 5 years later Harris Teeter has purchased this newer Lowes Foods store and the other in the Charlotte market.