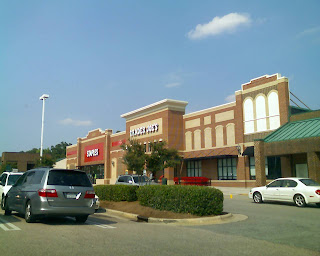 Trader Joe's first North Carolina store came to this former Winn-Dixie in Cary last year. The other half of it became a Staples store.

Trader Joe's is also known as the exclusive retailer of Charles Shaw wine, popularly known as Two Buck Chuck[9] because of its $1.99 a bottle price in California (although in some locales it sells for over $3 a bottle, due to varying state liquor taxes and transportation costs).

Trader Joes and Staples look up to the moment current, but the rest of the shopping center feels like the '80s. Check out that canopy on the right!

I like it. You must take me when I visit...and to the spin-off o' fazolis haha I like how Trader Joe's has its own lil line of names for products and such.