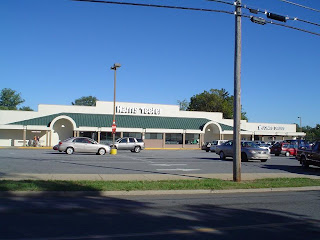 Harris Teeter once tried a foray into the North Carolina mountains, and for the most part it deemed unsuccessful for the grocery chain. However, they still do have a few stores (One in both Asheville and Hendersonville), and a store like this one in Morganton (which is technically part of the Charlotte market). What is further fascinating about this store is that it sports the old Harris Teeter logo and the old prototype design, and that it is located just a few blocks from downtown Morganton. All of these factors make it surprising the store still exists, considering Harris Teeter's vacating of smaller towns in recent years (from competition with discounters such as Wal-Mart Supercenters and lower-cost stores like Aldi and Compare Foods). (photo credit: jerseyman4). 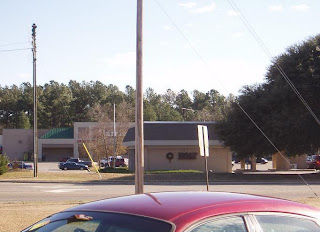 Another older type of Harris Teeter store lies in the town of Laurinburg, NC. This store is interesting for a few reasons. One thing is that it lies half-way between Charlotte and Wilmington on 74, but most of the Harris Teeter stores in towns between Monroe and Wilmington basically have vanished - such as in the neighboring town of Rockingham. However, this one somehow survives. One theory is that Ruddick, Harris Teeter's parent company, has a special relationship with the Saint Andrews College, which is located directly behind the store.
Posted by Grocerying at 1/10/2008 09:08:00 PM

The Morganton store goes all the way back to the Teeter Food Store days, as this location opened about 1960. In the 1970s another Harris Teeter store was located in the Morganton Plaza shopping center, beside Roses.
The Laurinburg store started life as a Big Bear store. That High Point based chain later used the Food World name, and in 1984 HT bought Food World. Not many of those original conversion stores remain.