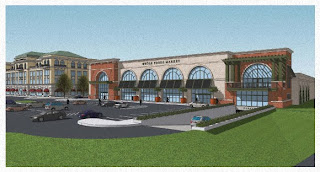 Charlotte
Last year, Grocerying published an article called "Will Charlotte ever get a Whole Foods Market?" Needless to say, this is the most popular post on the blog, garnering opinionated comments and conjecture as to why Whole Foods still did not have a Charlotte location. Now Whole Foods Market is set to build a store in the SouthPark area near Philips Place Shopping Center. The new development will be called Ashley Park, on the site of the Allen Tate property and part of the former Live Oak public housing. The store, once opened, is poised to be a major draw for the region. People have commented that they've driven to stores in Greenville, South Carolina and Winston-Salem to get their Whole Foods fix. The store will be 42,000 square feet, somewhat smaller than the original Whole Foods proposed for Charlotte, which was 55,000 square feet. The store will include an underground parking garage.

Greensboro
The Greensboro store will occupy part of the current Sears store at Friendly Center. Sears at Friendly Center has been open since 1973, with no exterior remodel since its opening. It currently is the largest store in the shopping center, occupying 163,941 square feet, according to tax records. Interestingly, Sears will be reconfigured so that Whole Foods' exterior faces Pembroke Avenue. The store will be smaller than the Charlotte store, at 34,000 square feet, but larger than the other Whole Foods Market in the Triad, which is in Winston-Salem. It will be interesting to see if Sears and Whole Foods develop a synergy and see cross-shoppers. The idea of Whole Foods taking space in Sears, and having Sears reconfigure, seems like a green and efficient idea rather than building a brand new store.

Location Location Location
Although the announcement of both stores may come as a surprise, their respective locations are not as surprising. SouthPark in Charlotte and Friendly Center in Greensboro are the prime upscale shopping destinations in these cities, so it makes sense that Whole Foods would go great lengths to put stores in these retail districts. In addition, all the other current Whole Foods Markets in North Carolina are open as a result of buyout of Wellspring Markets (or Greenlife Grocery in Asheville). So these locations were predetermined by their previous owner, not Whole Foods Markets. The only other new planned Whole Foods store in the state is coming to North Raleigh next year. Charlotte's store is located down the street from competition Earth Fare and the flagship Harris Teeter store. Other specialty markets in the area include The Fresh Market, Dean & Deluca and Reid's Fine Foods. In Greensboro, Friendly Center is home to Harris Teeter's largest store in the region, just a stones throw from where Sears is and Whole Foods will be.

Impact
The impact of Whole Foods Market will be interesting. In Greensboro, Whole Foods has been only a 30-minute drive away, not terribly far. In Charlotte, many fans of the store have been on a roller coaster of wondering if the store will come or not. With announcements of a 2004 store in Elizabeth and 2006 store in another part of SouthPark falling through, people were left hanging and without any answers. The speculation continued and spurred grassroots efforts through the internet to lure the store to the Queen City. Looks like it worked... and for those of you speculating that Whole Foods Market would not locate in the "home turf" of another supermarket (Harris Teeter/Charlotte; Fresh Market/Greensboro), these announcements may just debunk that theory.

I guess the Charlotte store means the end of that vintage Burger King on the corner of Sharon and Fairview. Notable, but no big loss.

I think that the Burger King will be saved. The Whole Foods will be next to it.

Just what we need: ANOTHER grocery store in SouthPark, when areas like Plaza-Midwood are literally STARVING for decent grocers. When is that problem going to finally be solved?