When Greensboro's newspaper, The News & Record, polled readers as to which store they would most like to see come to the Triad area - one retailer had an overwhelming majority, Trader Joe's. Since 2007 the specialty grocer has been on a slow but steady expansion throughout the Carolinas, with stores currently in Cary, Chapel Hill, Charlotte, Raleigh, Greenville (SC), and Charleston (Mount Pleasant). It has long been rumored that Trader Joe's is looking for a location in the Greensboro or Winston-Salem area, although those only amounted to what they were... rumors (including an unfounded but widely circulated rumor about the store taking space at the Target shopping center on Lawndale). 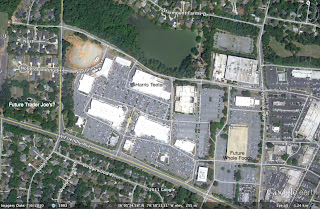 Now, the newspaper is reporting that Trader Joe's is interested in a site near Friendly Center. The Greensboro site is adjacent to The Shops at Friendly Center, which houses Harris Teeter, and right next to that is the Whole Foods Market that is set to open soon. Trader Joe's site would encompass the northwest corner of Friendly Avenue and Hobbs Road, which is currently six residential lots. Previously, The Triad Business Journal reported that Trader Joe's may have been interested in redeveloping the old City Motors site off of Westover Terrace. Despite an abundance of vacant space across town, the developers' hearts look to be set on Friendly.

March 2012 Update: Trader Joe's has signed a lease for a store in Winston-Salem at Thruway Center in part of the former Borders bookstore space, that location will open later this year. Plans for the Greensboro location are still at a standstill.
Posted by Grocerying at 12/13/2011 11:27:00 AM